Having visited Paris in the end of March, I still cannot tell whether that was a mistake. On one hand, the high season is not there yet and the queus are tolerable. On the other hand, May or June could be a better time – Paris is full of gardens and parks and now I can only imagine how beautiful it is here when all those trees are blooming and there is a little green between the grey and intimidating palaces of stone. Well well, looks like I will have to come here again! Fortunately, the sightseeing checklist is already done, there will be no need to queue for random reasons, and I can just relax in parks and walk along broad Paris avenues.

Paris reminded me of St. Petersburg a lot. See for yourself! Here are numerous parks in the middle of the city: 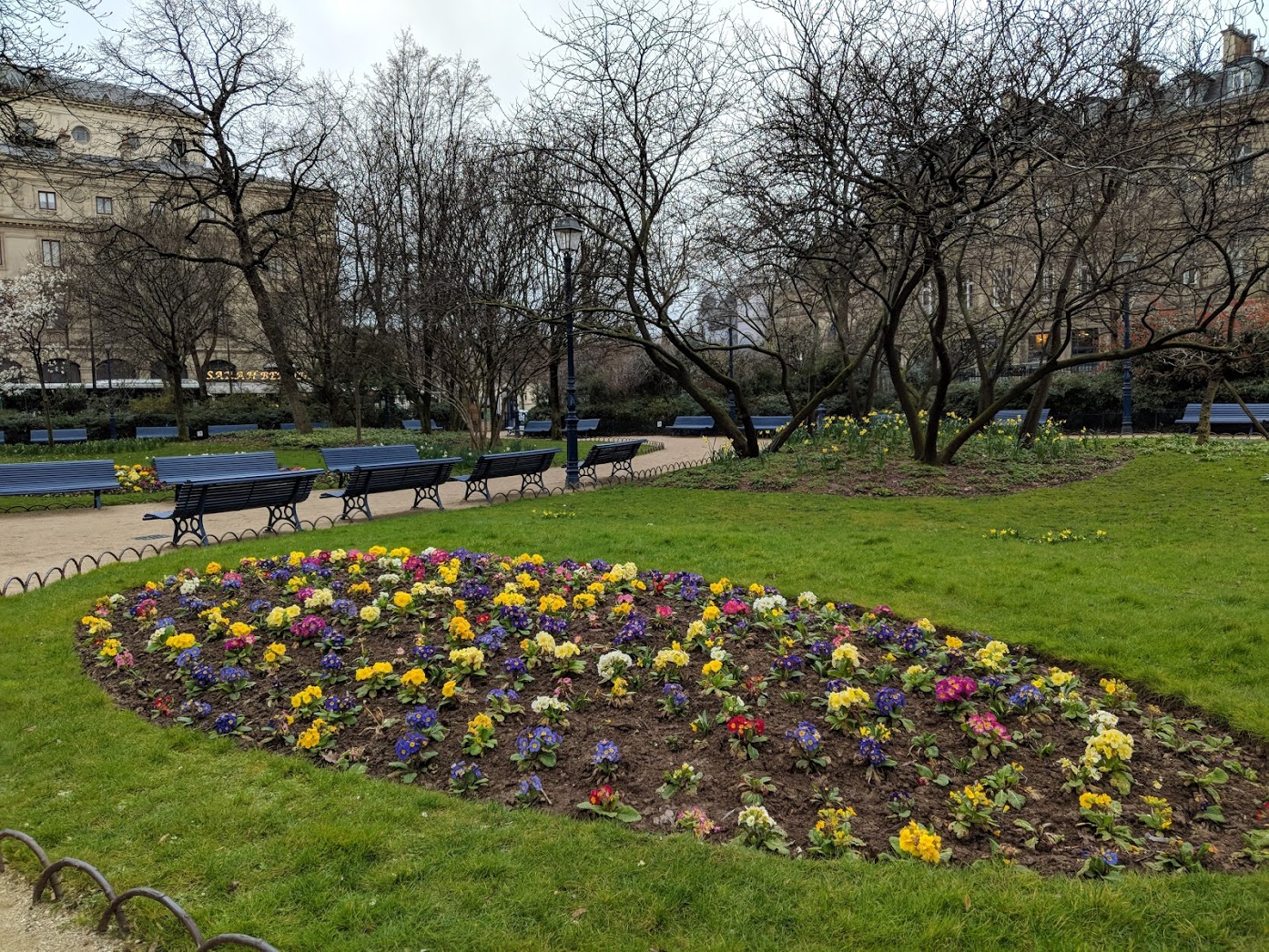 Right there – a baroque palace which is now a museum: 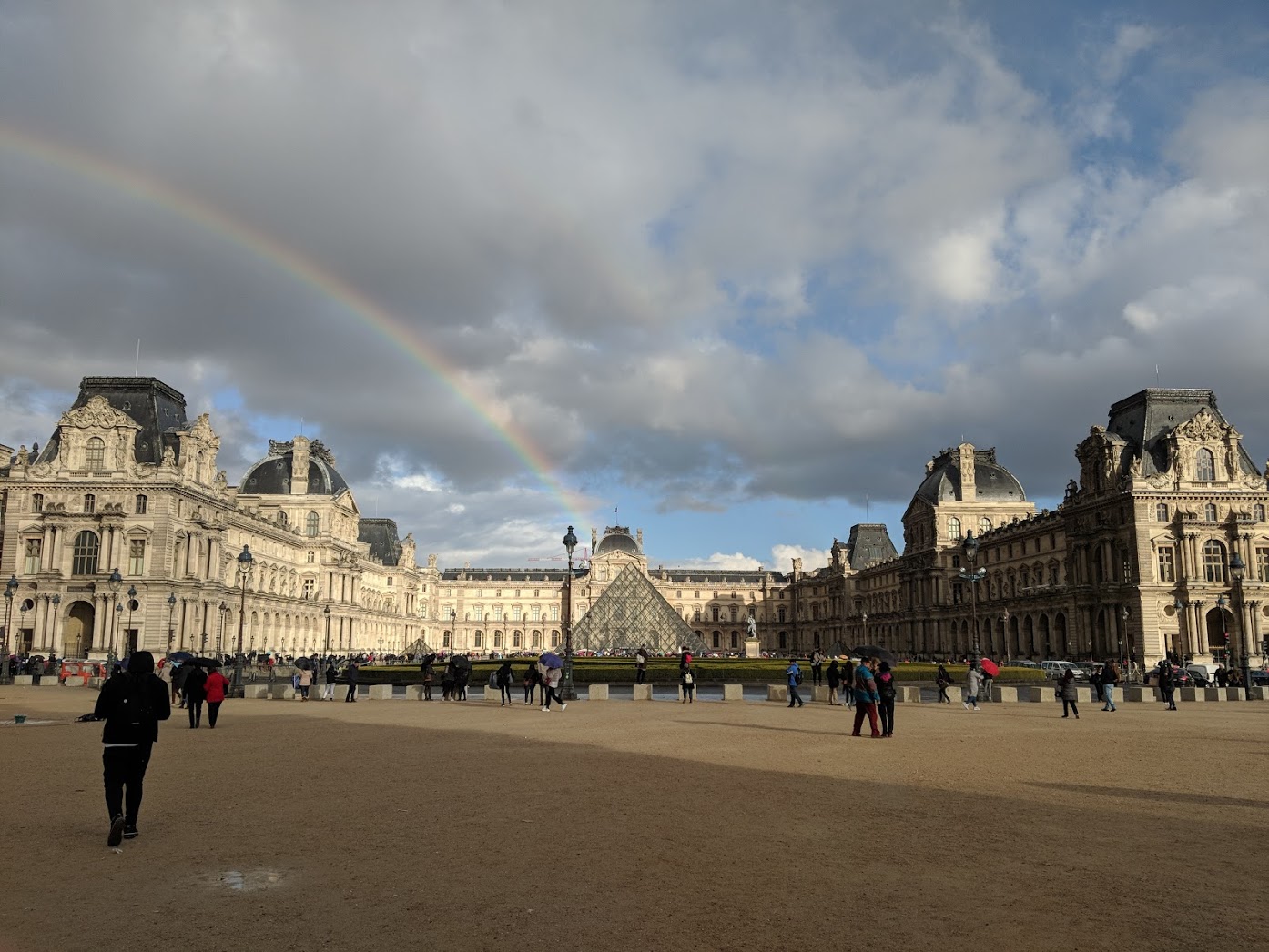 In the suburbs there is another palace surrounded by a huge park with fountains: 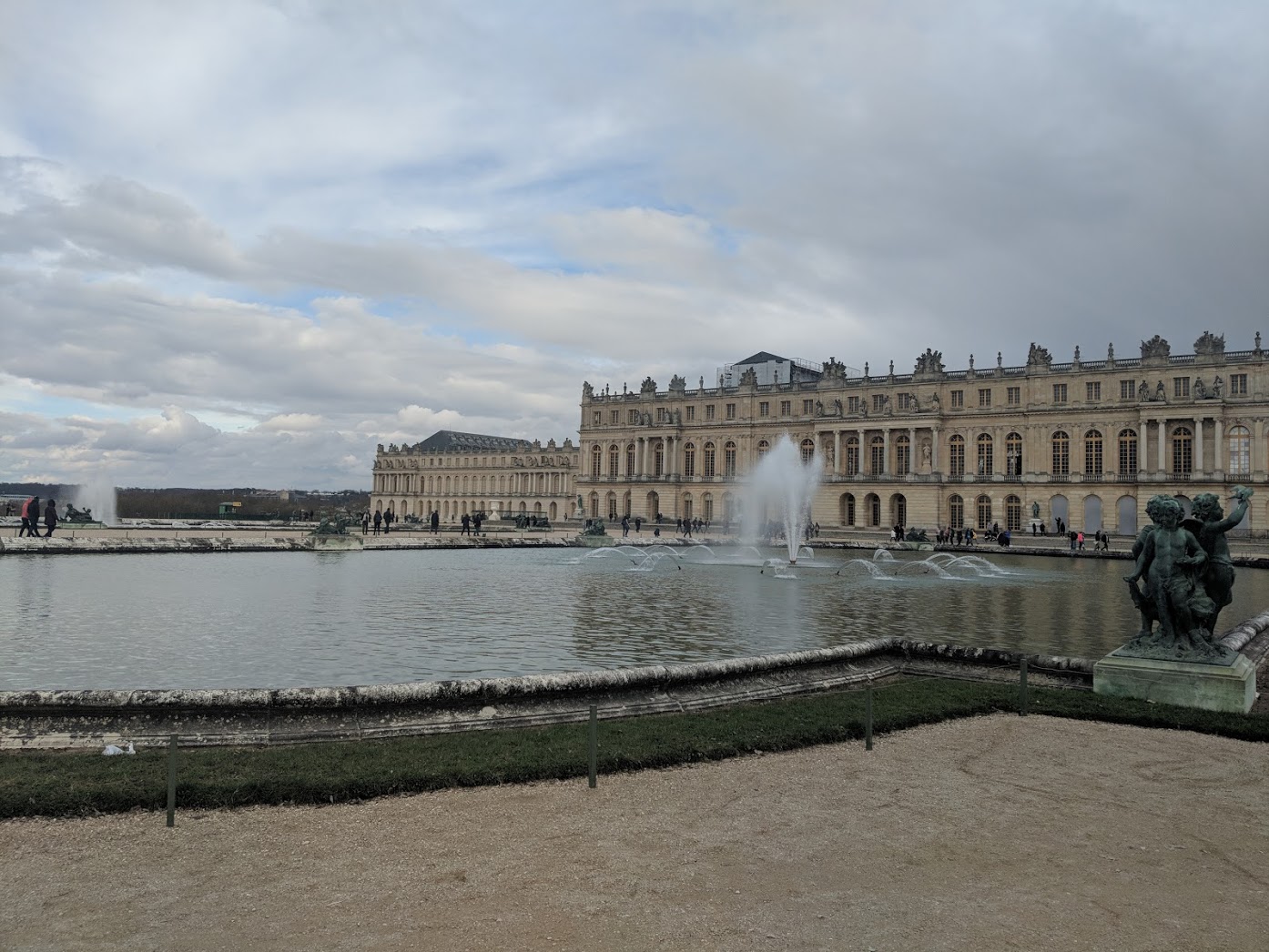 Gigantic mansions stand side by side like a wall, and broad streets: 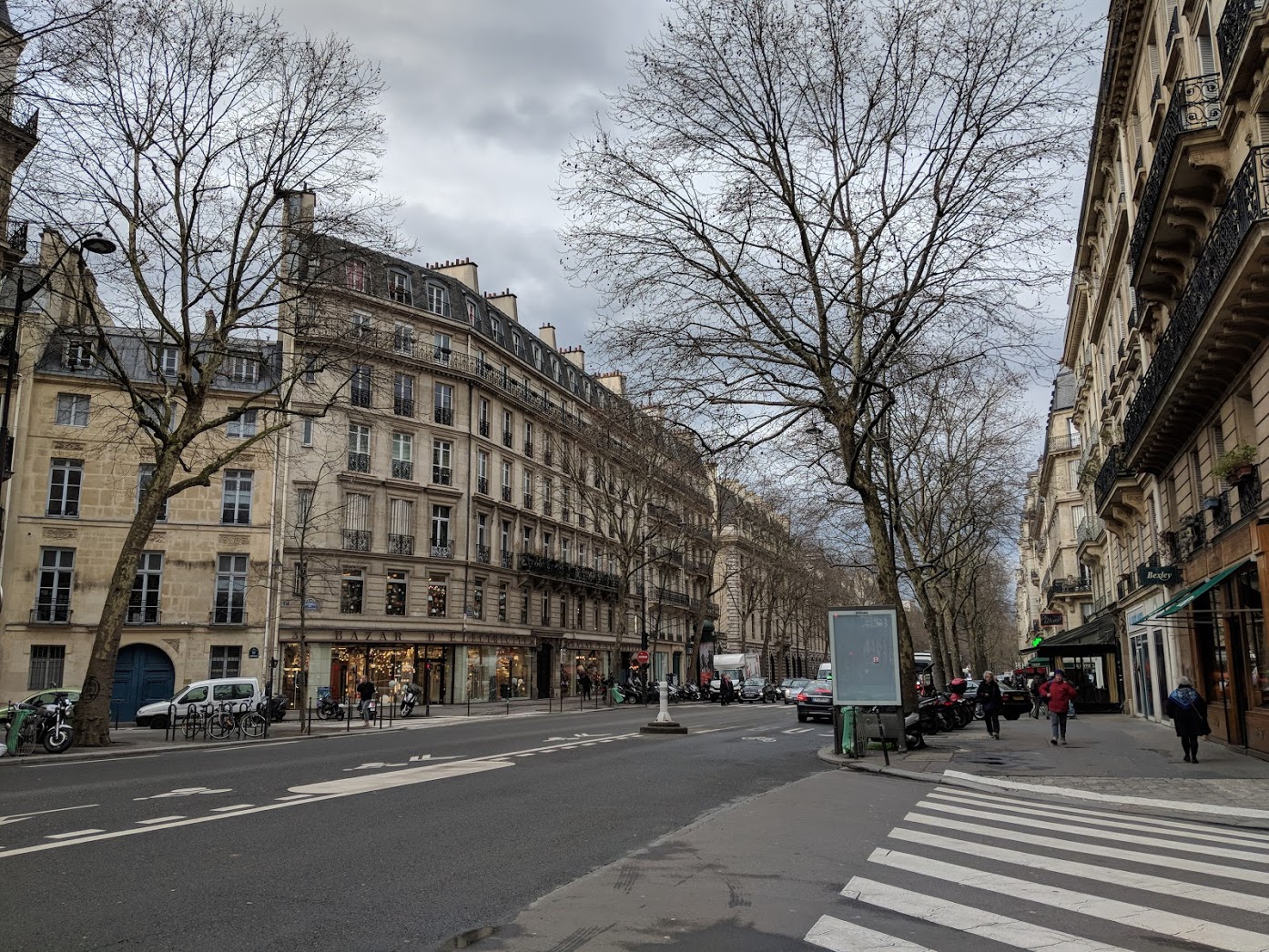 But once you turn away from the tourist path, all the gloss is suddenly gone: 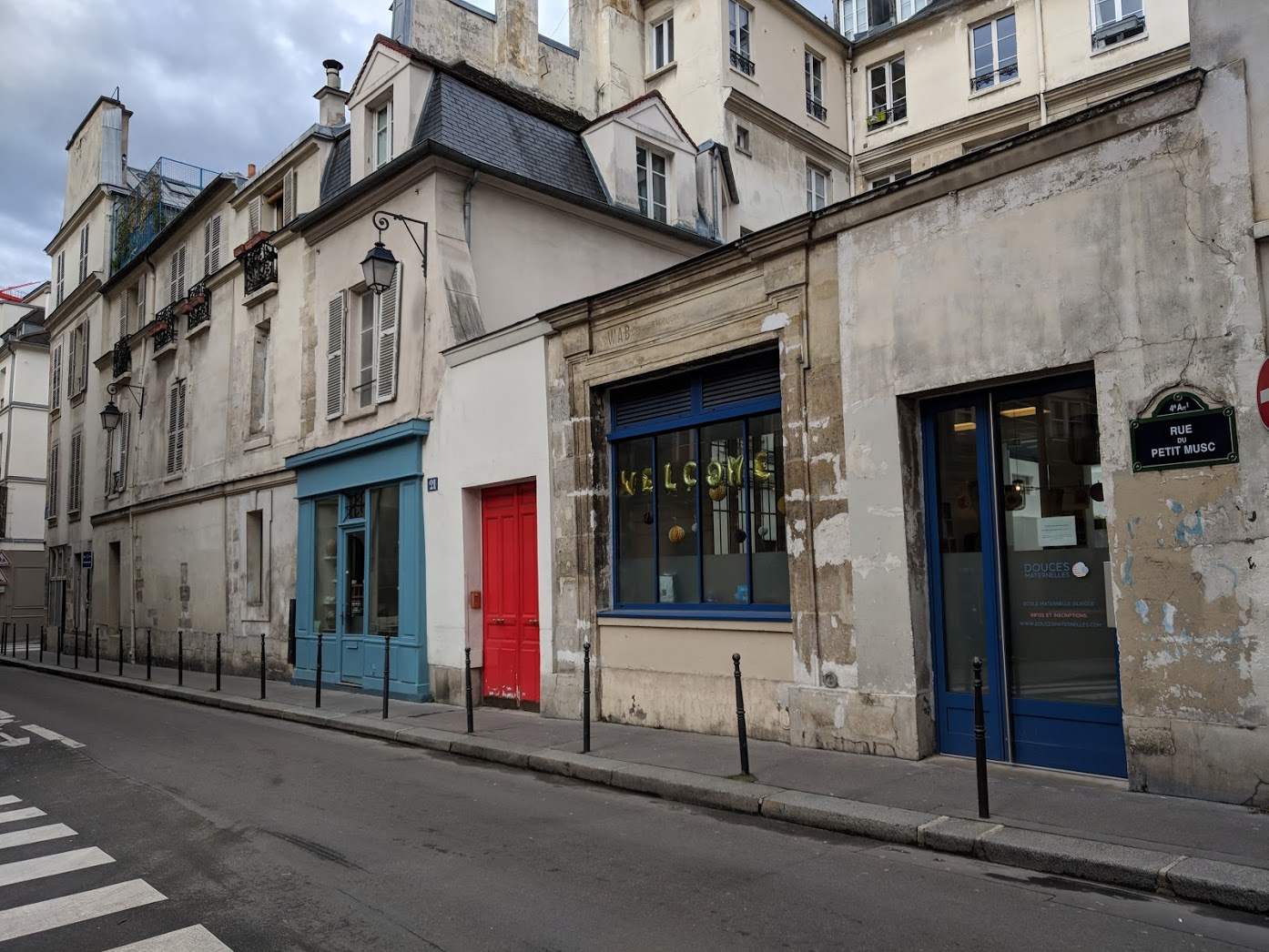 Despite these similarities, the two cities are radically different in their spirit: Paris is about casual, everyday luxury. The palaces (even Versailles!) look much more humble on the outside than the ones in St. Petersburg, but on the inside they are much, much bigger and literally glitter. The most inconspicious restaurants will have the best chefs and flawless service. The beautiful and shining Galeries Lafayette can be easily missed when passing by, but if you go inside: 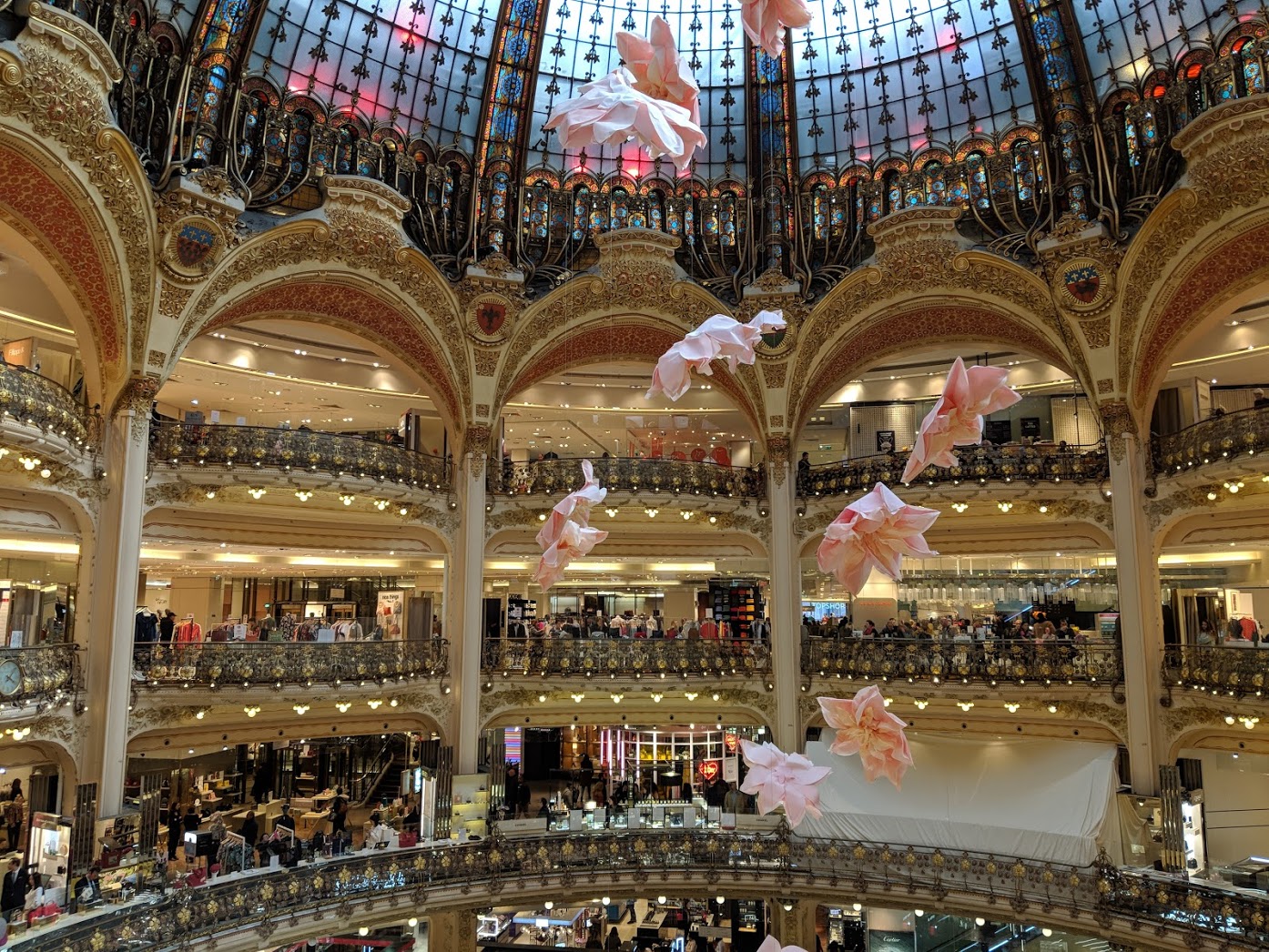 Talking about the sights – I found them largely overrated. As to me, there are many cities much more interesting than Paris, and it is a mystery to me why it is one of the most visited cities in the world. If you walk into the famous Notre Dame de Paris, you will see the most boring gothic cathedral, even though it looks pretty on the outside. 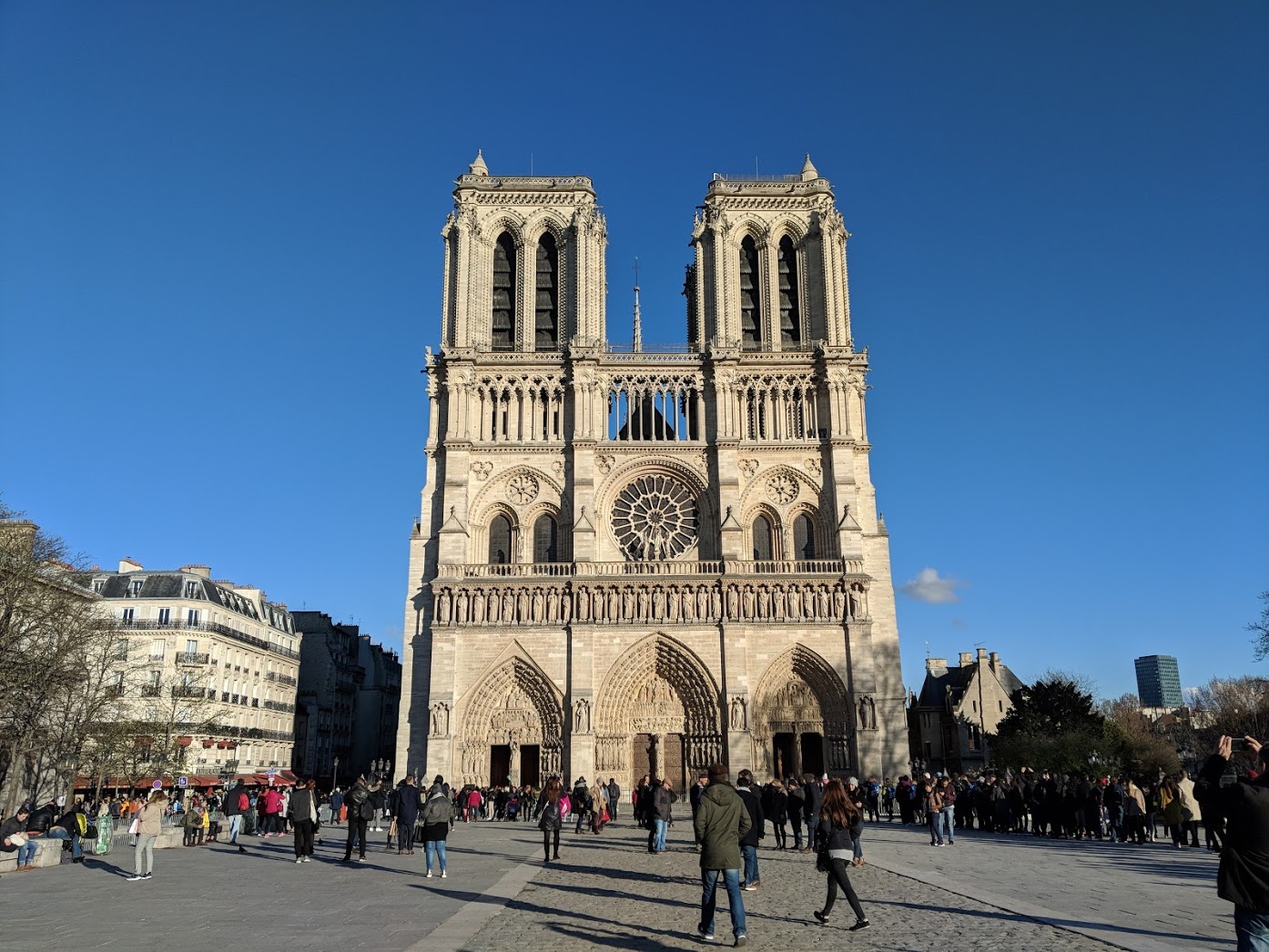 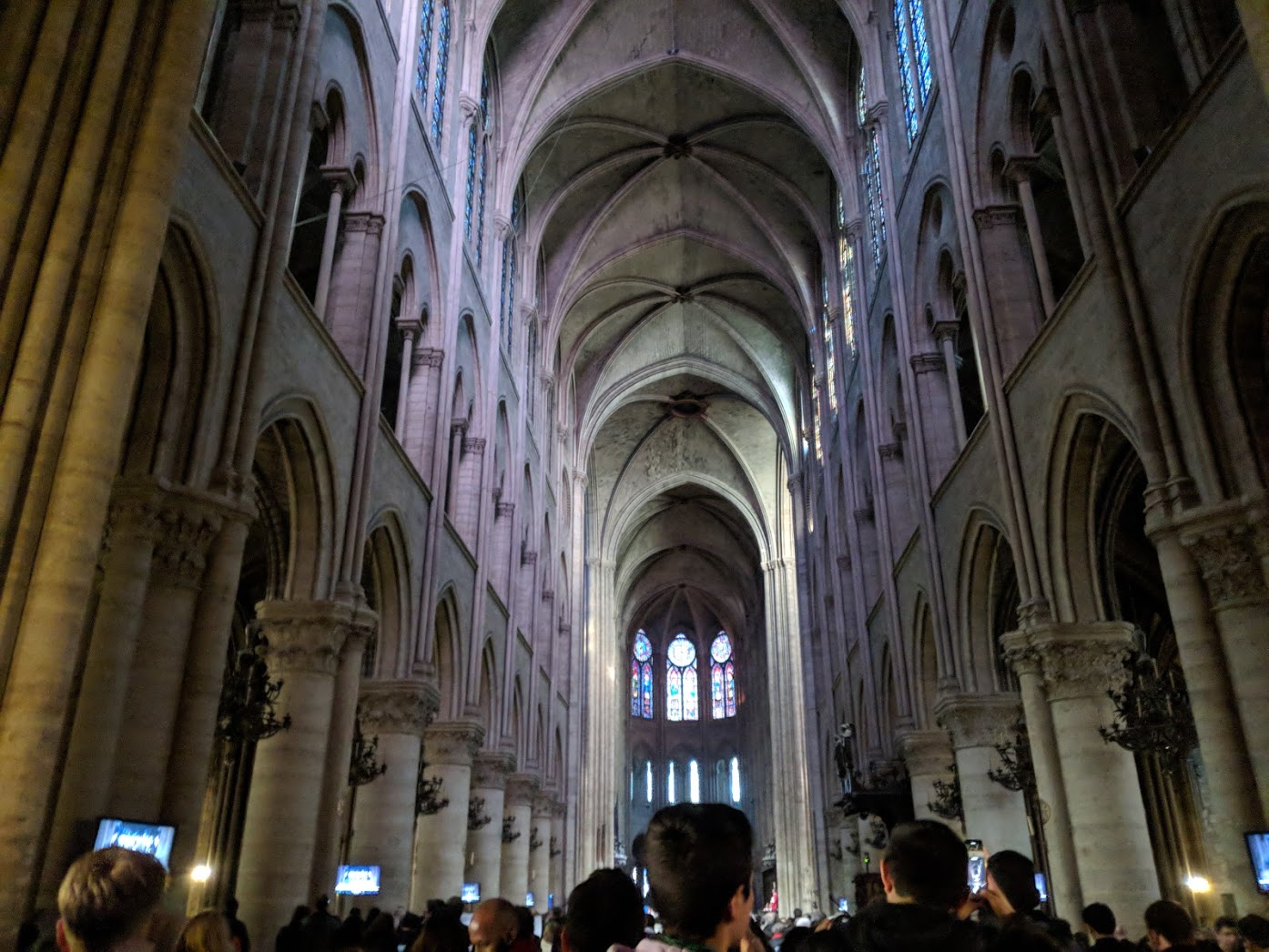 The Eiffel Tower view is not very special either – it is not even thrilling despite the tower’s height: 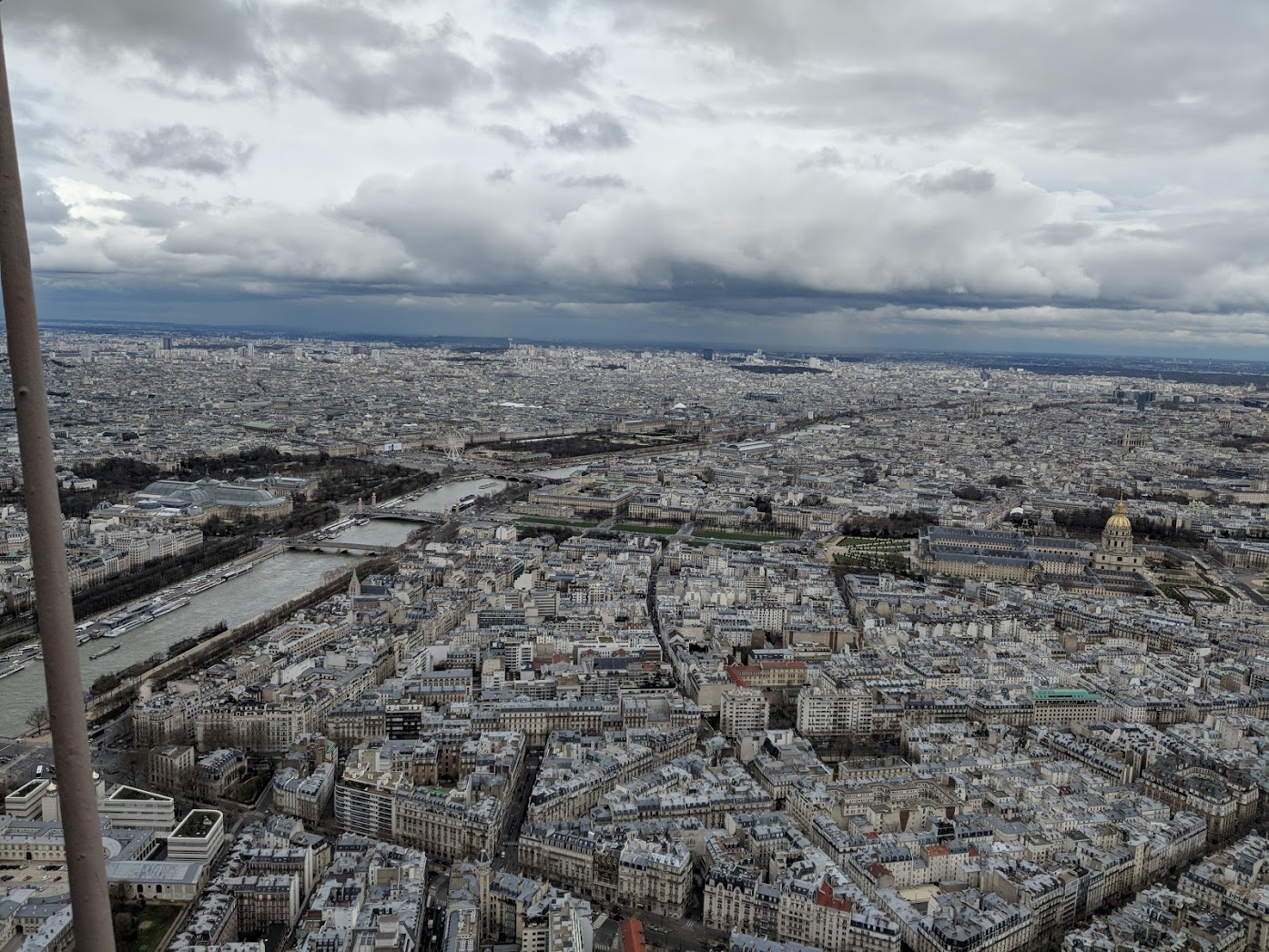 The tower itself, on the contrary, is quite interesting! The first thing about it – it is huge! You only realize it fully when you stand under it: 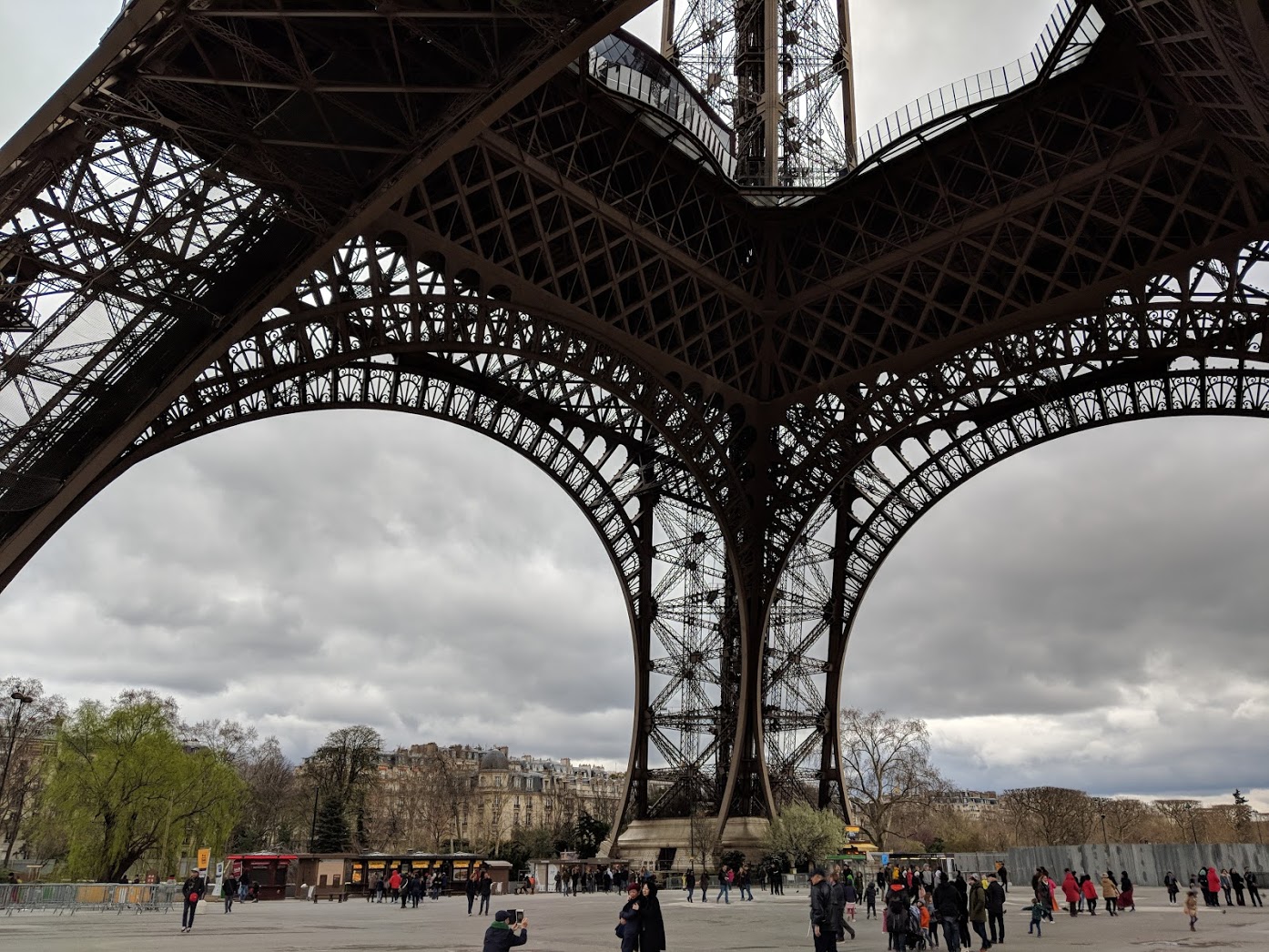 Second, while climbing up the stairs, you have a chance to admire the complexity of the engineering work that went into building the tower. If you have any relation to engineering – this is must do! There are two options for going up: elevator only or combined elevator + stairs. Choose the latter – you will save yourself some queueing time and will get an opportunity to appreciate all these cool constructs: 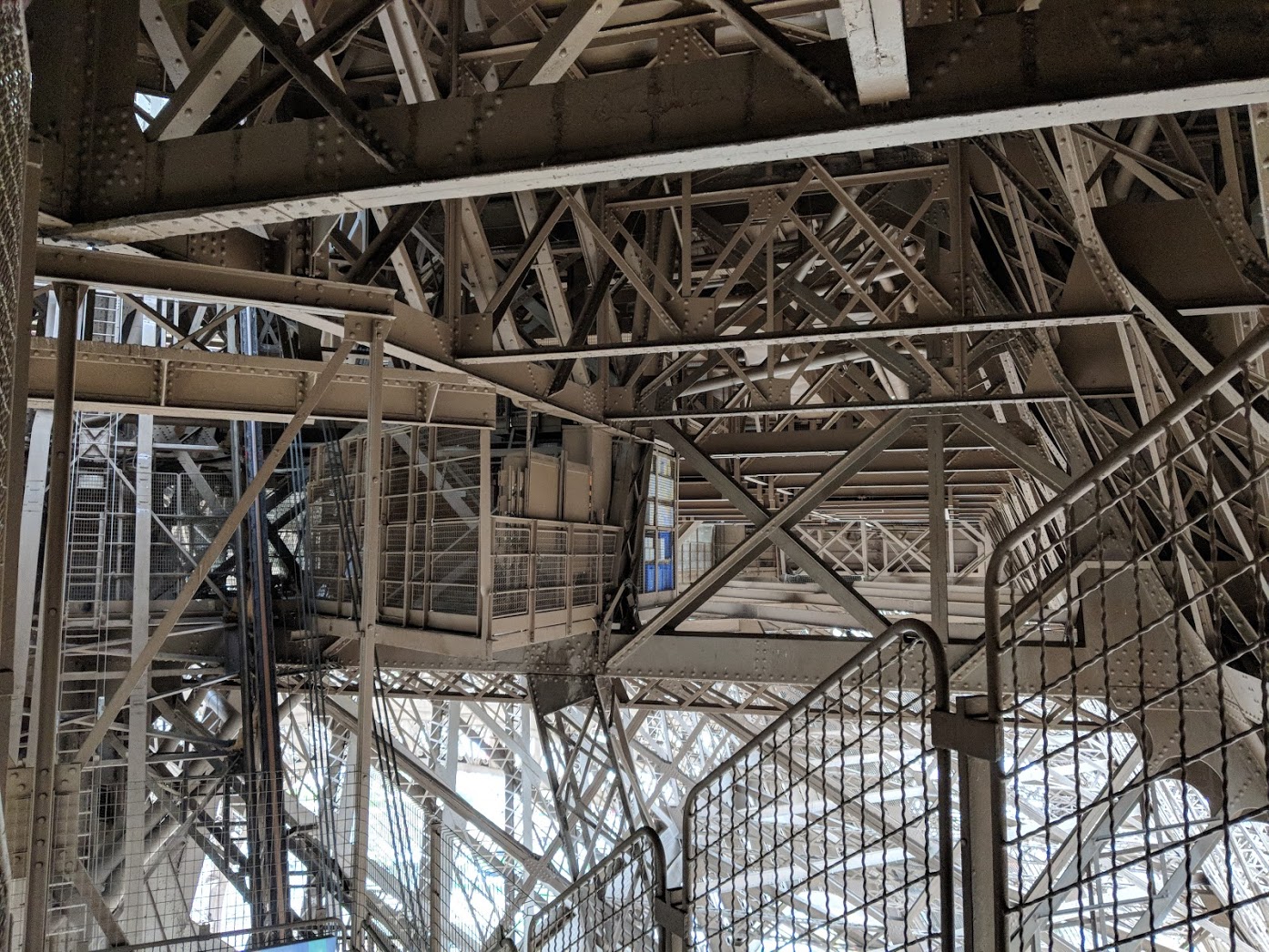 Viewing the tower from the outside can be done from right in front of it – the Mars Field park: 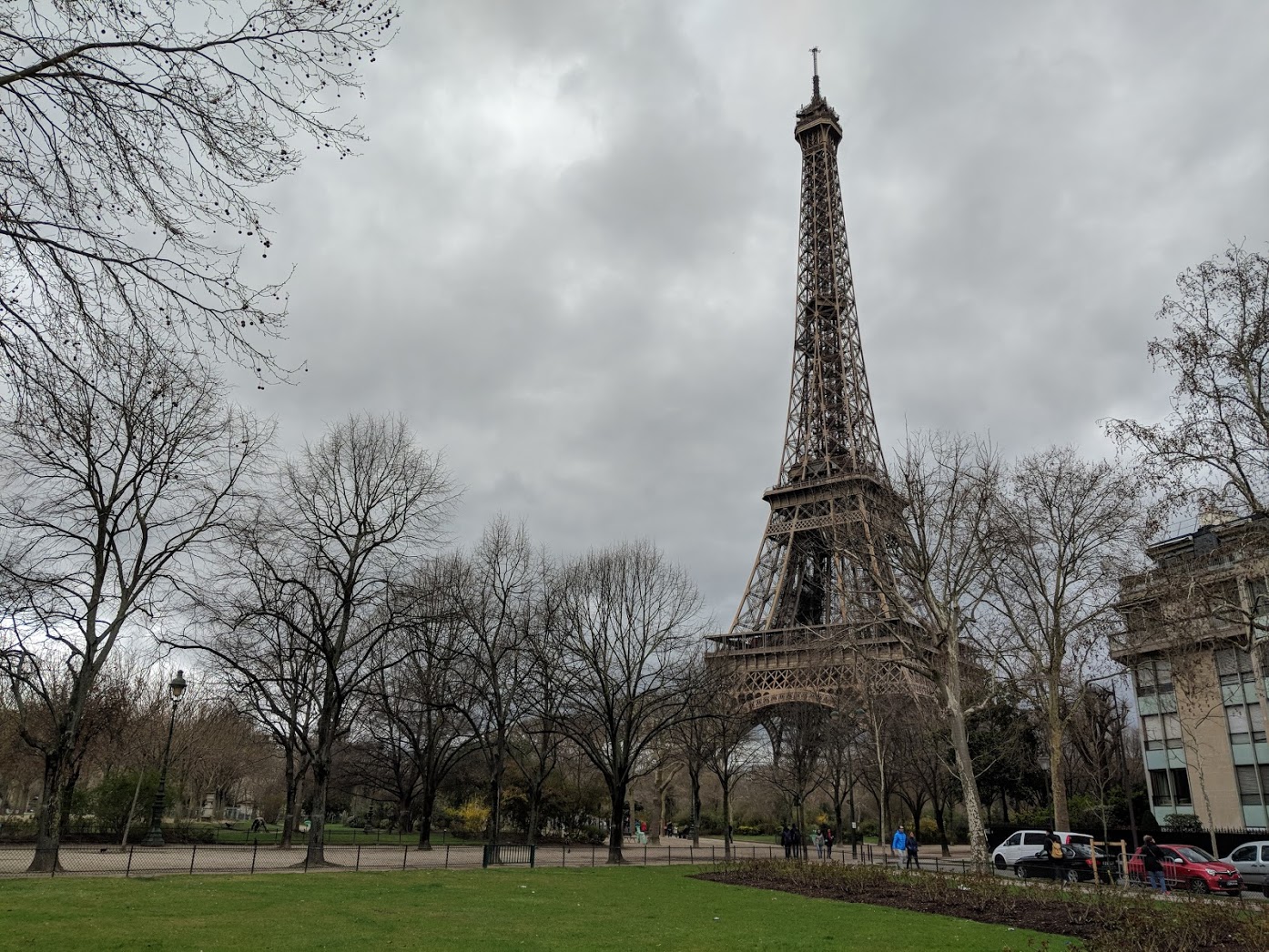 Or from viewing platforms further away. The closest one to the tower is the top of the Triumphal Arch, which is a popular sight itself: 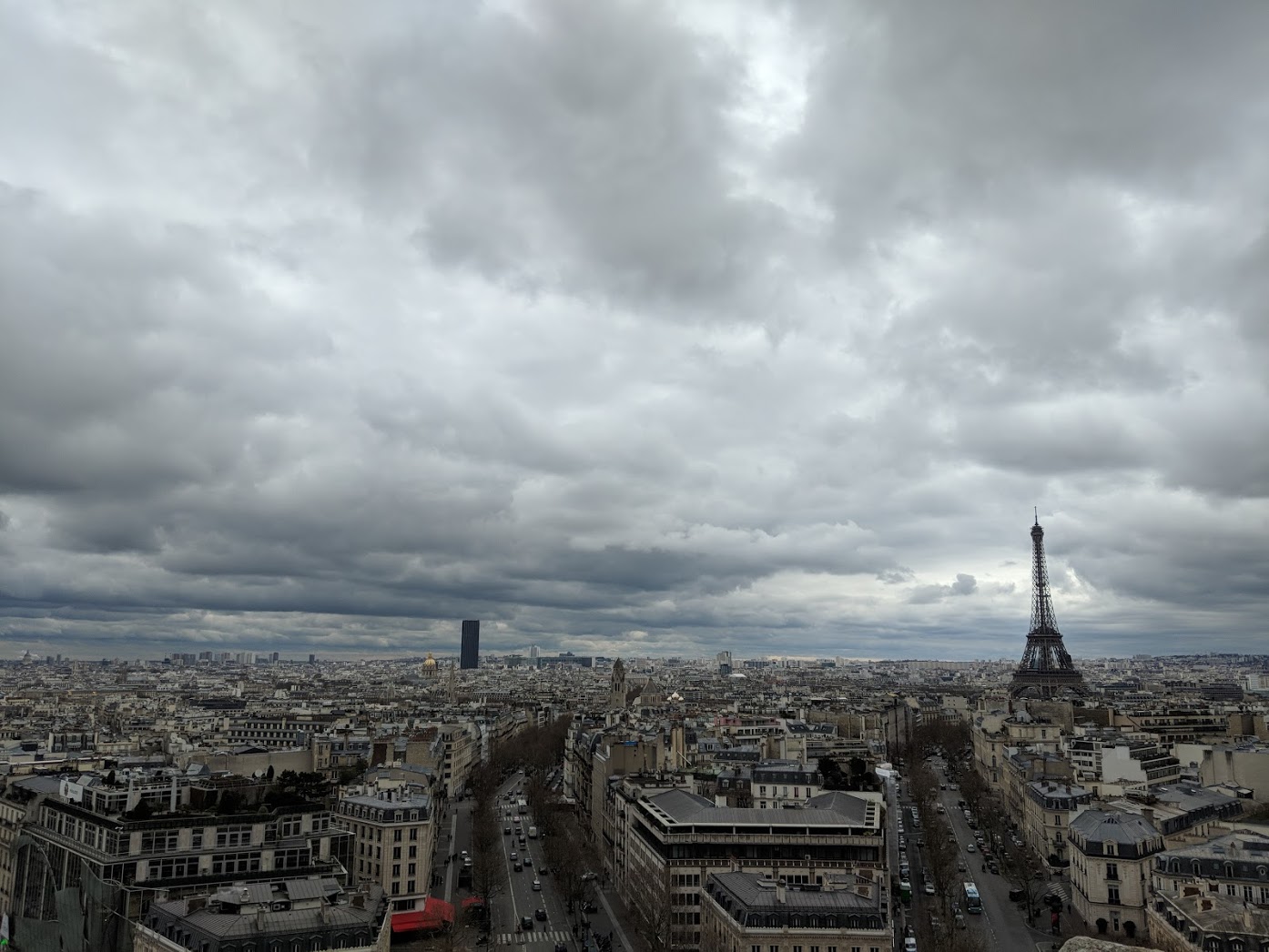 More panoramas can be viewed from Montmartre hill which has a beautiful church with a viewing point in its dome. The view is not the only reason to climb up here: the church is of interest itself. It does not look like a conventional catholic cathedral neither from the outside nor on the inside – it is very bright and welcoming: 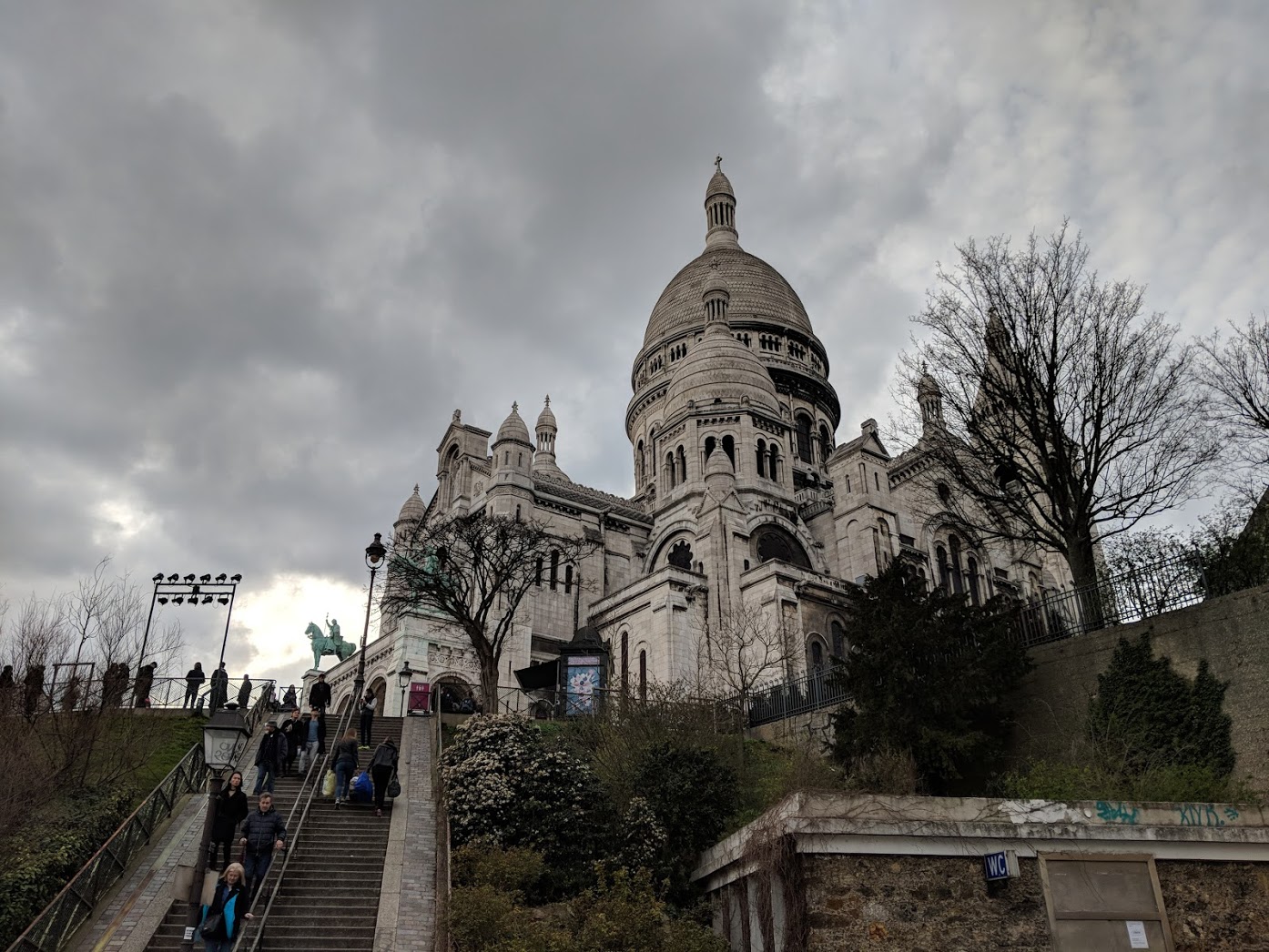 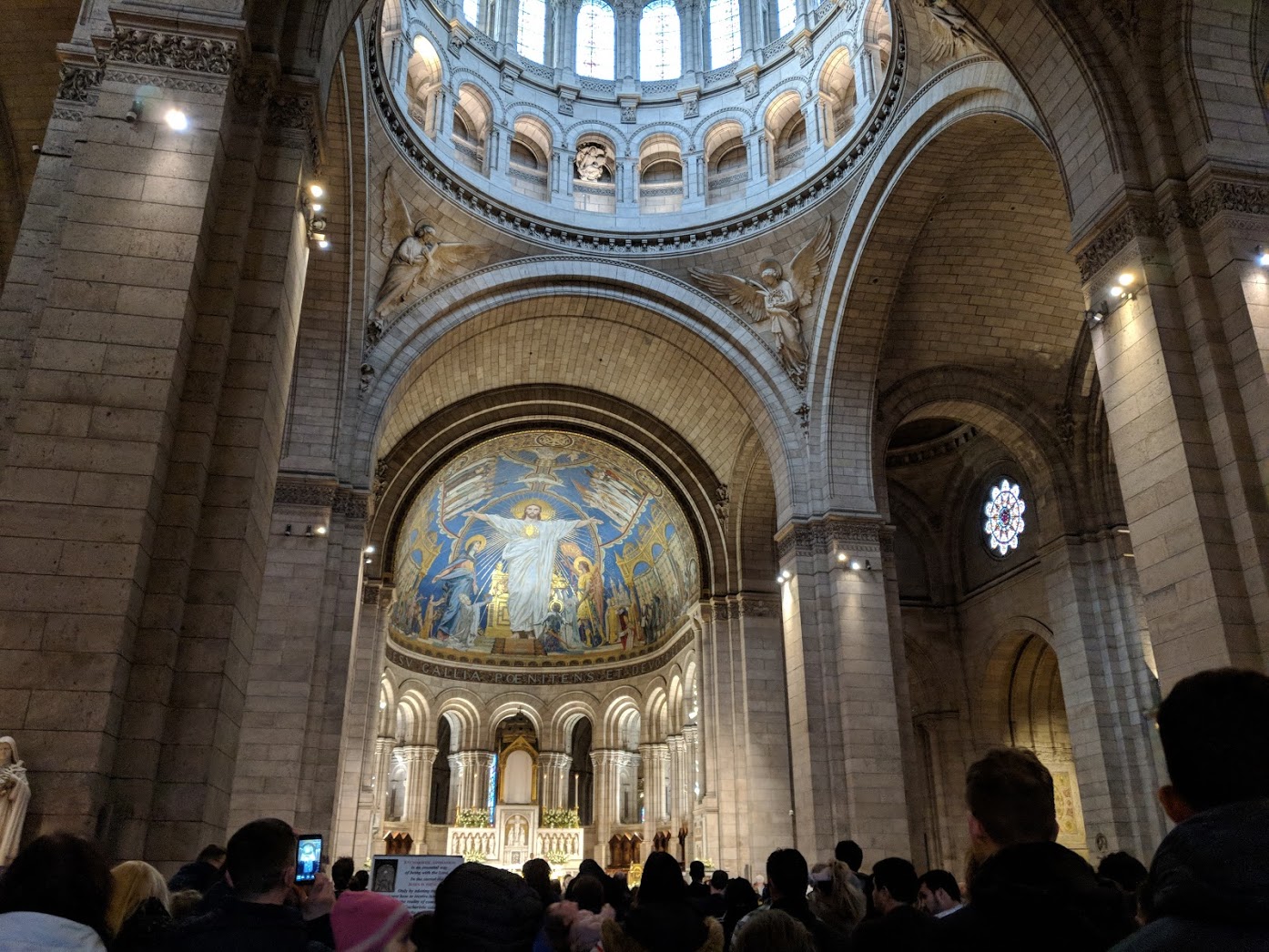 It makes sense to go to Montmartre as late as possible, when the Sun has already started its decline. The hill is located next to the Paris’s red light district, and if you were planning to see a show in the evening, it is convenient to do those two things at once. In case you are not interested in shows there is little sense in going there at all. Apart from kebab places and sex shops there is really nothing there: 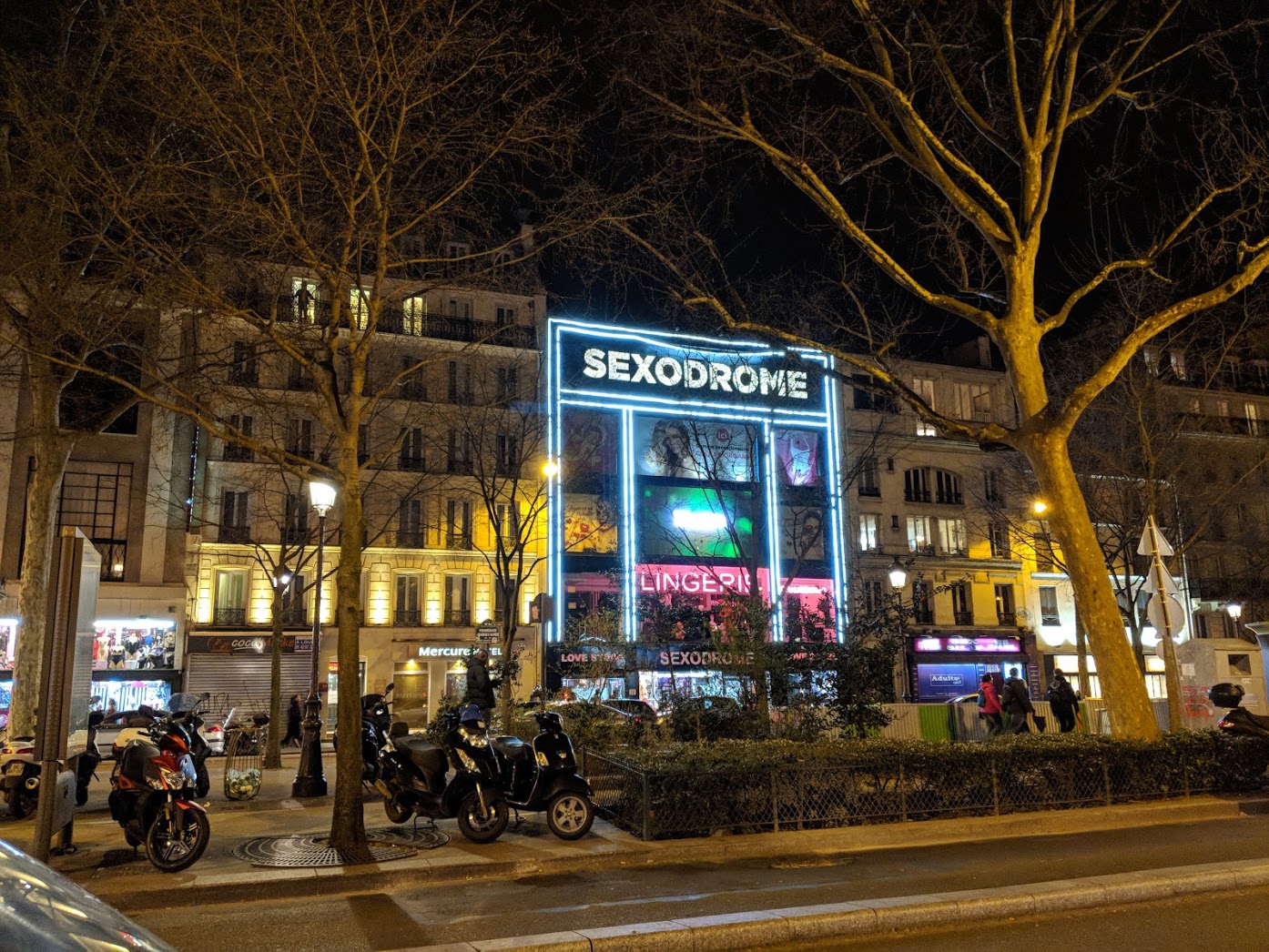 The only reason could be to see the famous red mill: 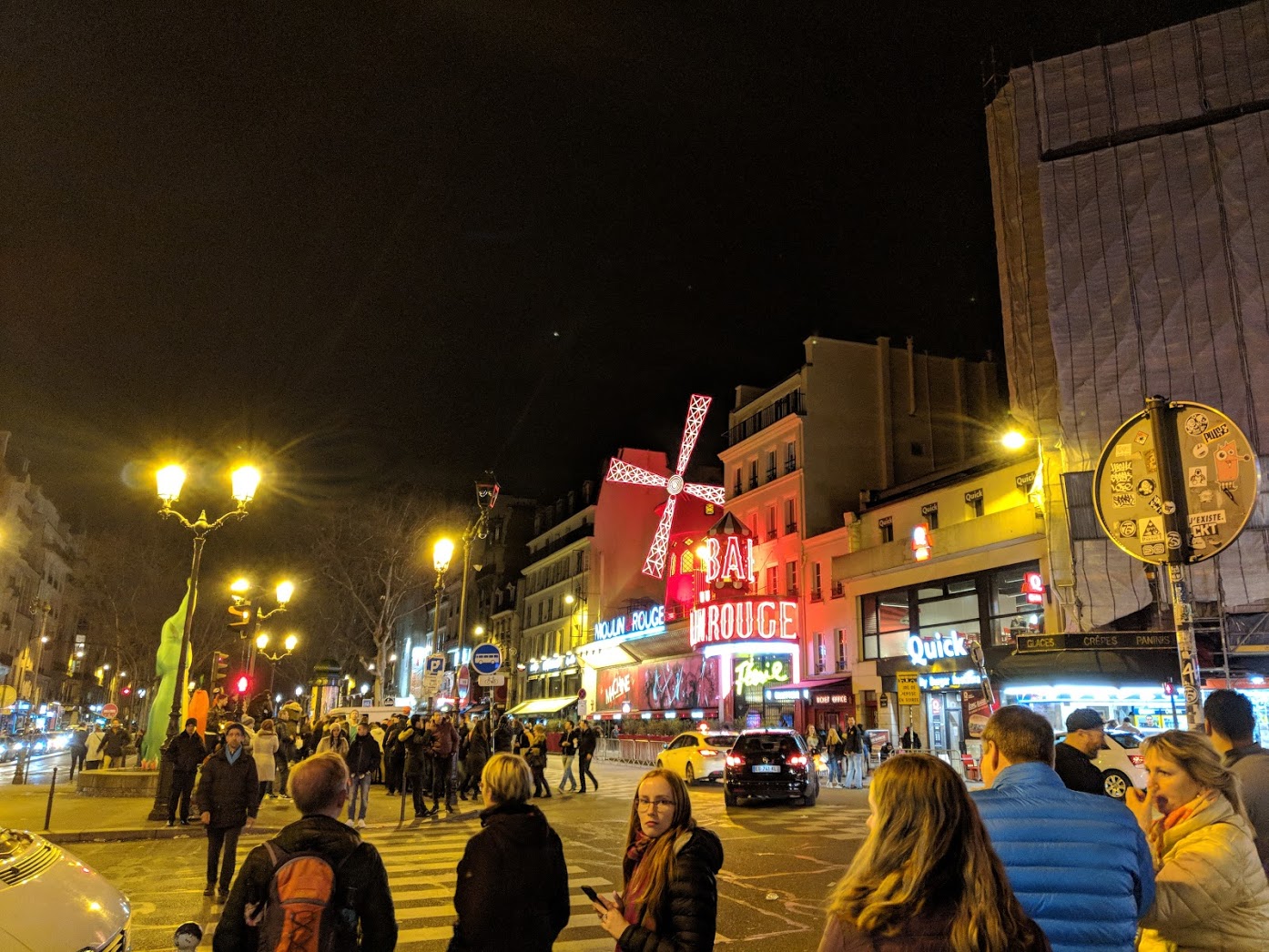 It is your call though if it is worth going to this unfriendly, shady district 🙂

I found Paris in general quite a boring city – no idea what I was doing wrong. Maybe I should have gone to museums? But have you even seen the Louvre queue? 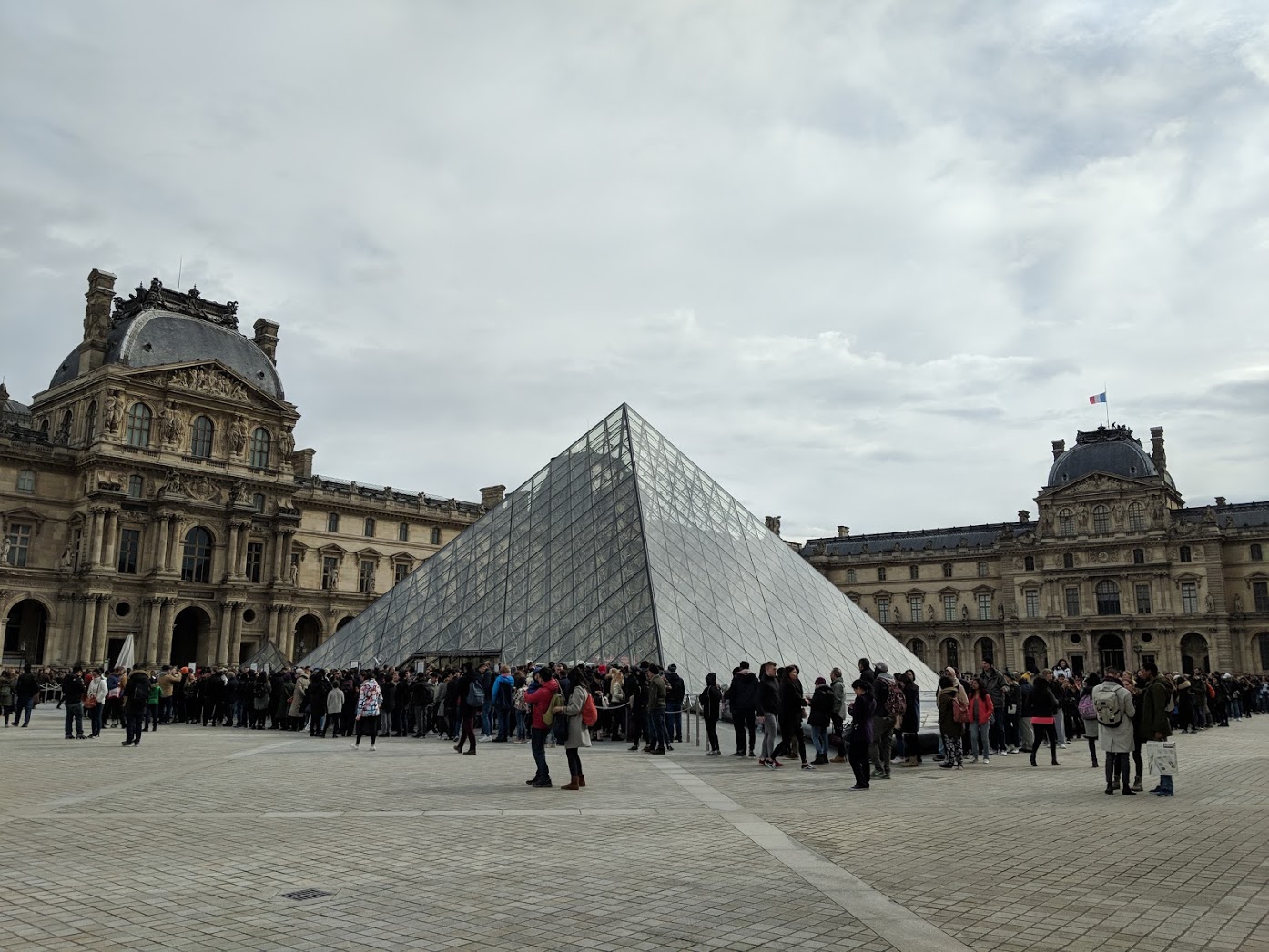 And since we are talking queues here… After doing in one day everything I have described above we set our way to the suburbs, to the palace of Versailles, to meet the king… of queues. All the people you see in this picture stand in the same queue which goes seven times up and down this quite big square! 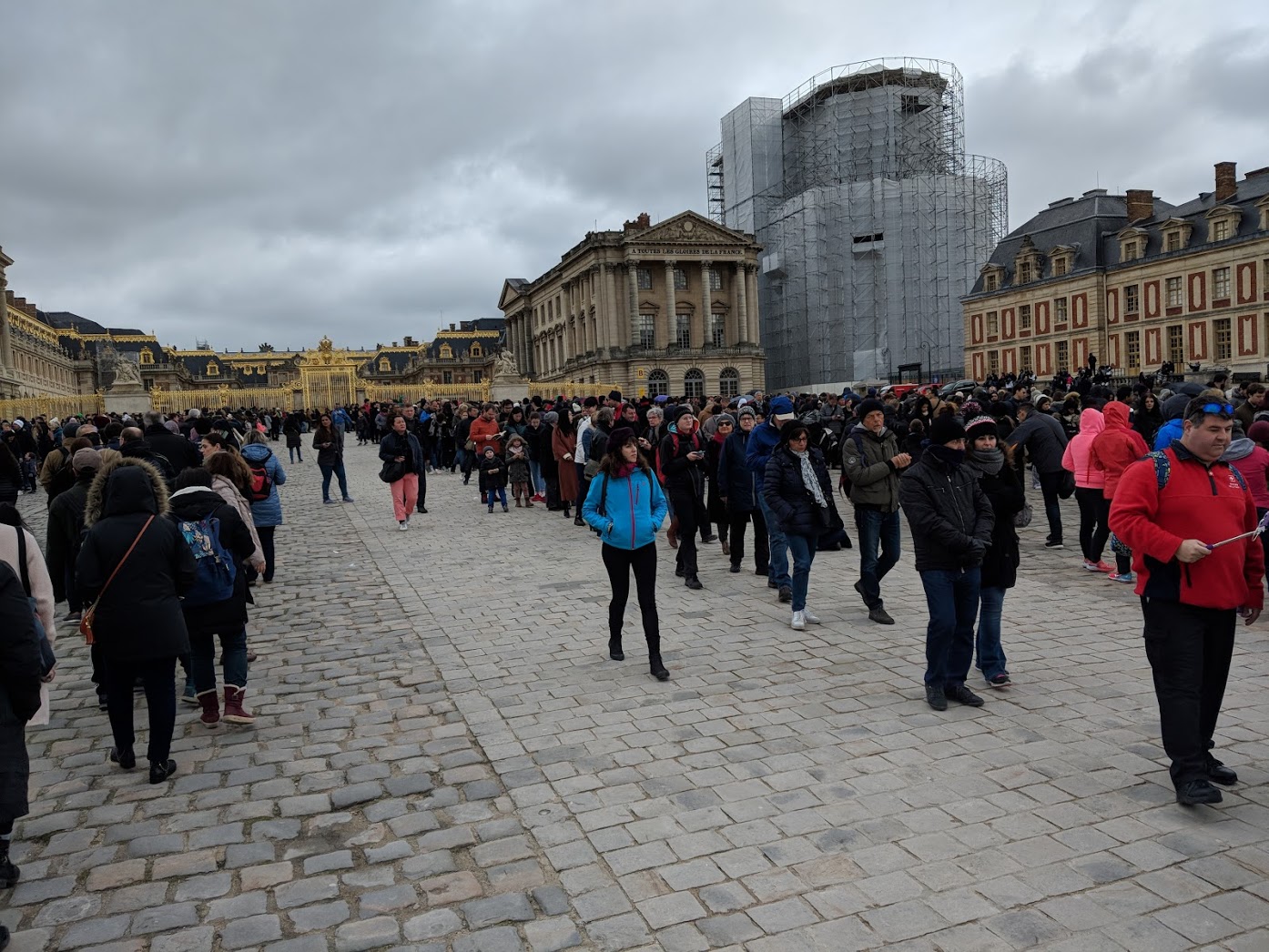 Looking back, I can tell that what I saw in Versailles was not worth three and a half hours of queueing. The Palace is much richer than the one in Peterhof but the style is similar enough: 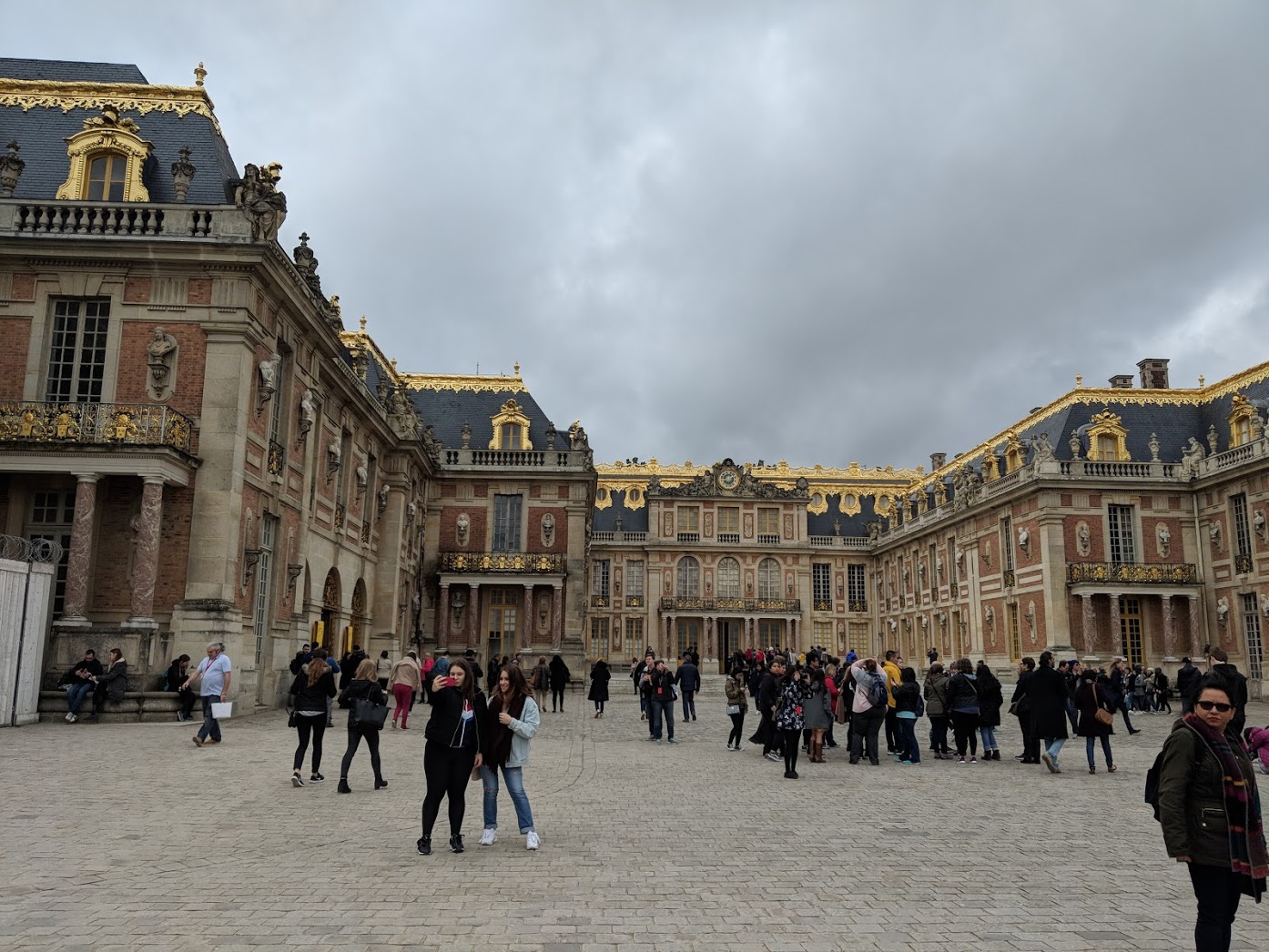 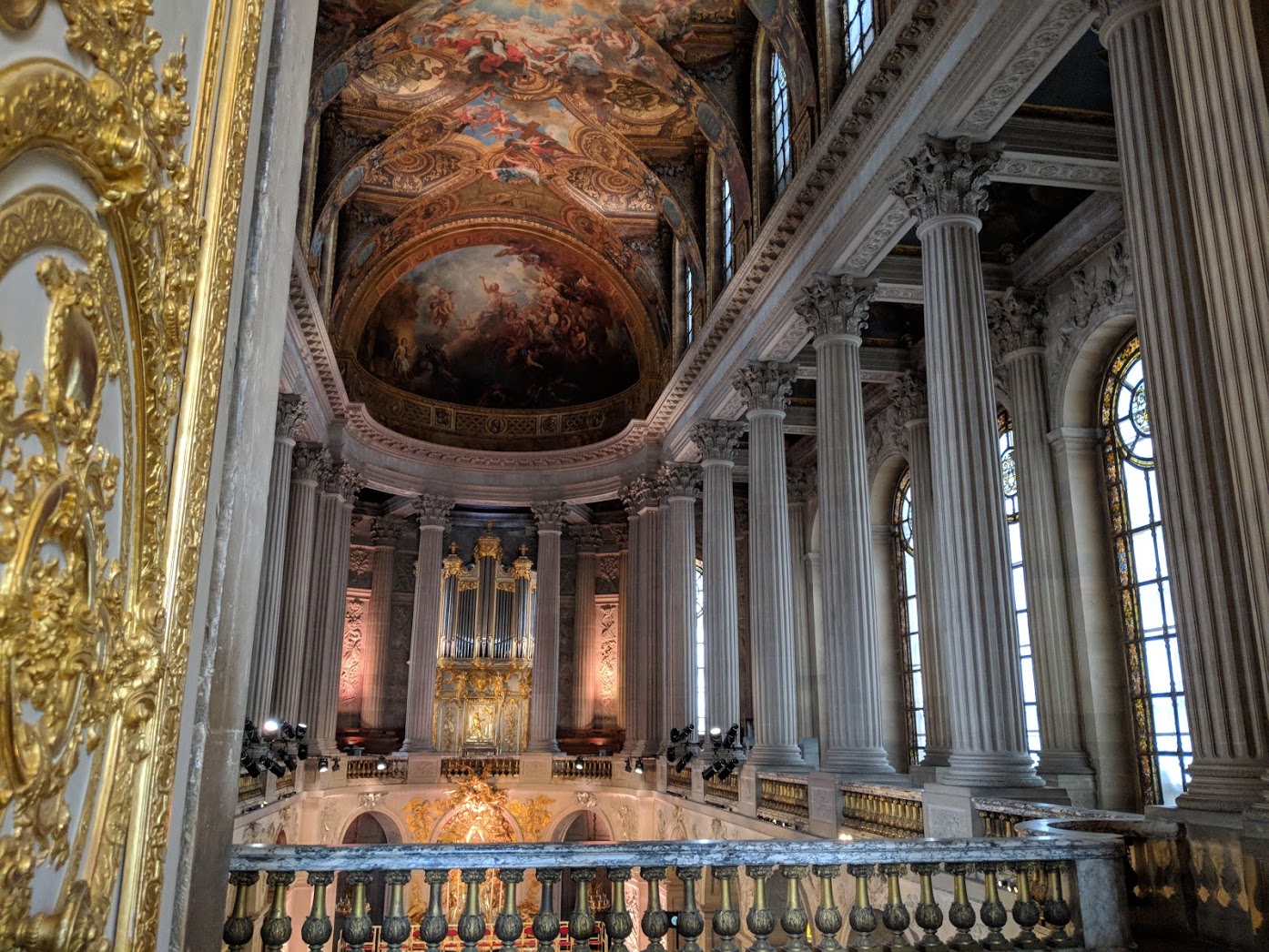 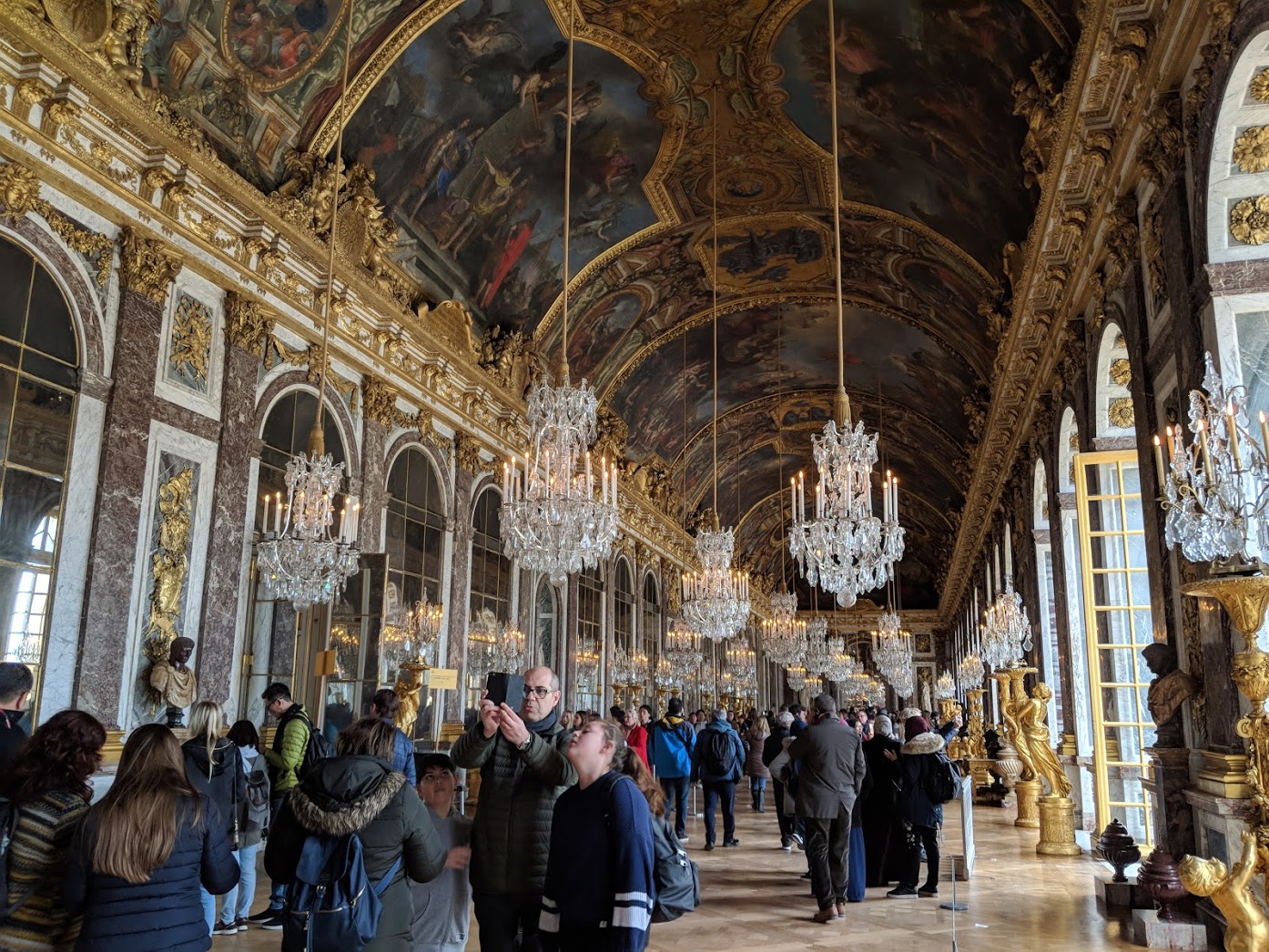 If I was to say one thing about Versailles’ interior it would be “show off”. Exterior, on the other hand, does not look that rich. The palace’s facade is done in humble, pale colors. The park is huge but barely contains anything interesting, the fountains are few and boring: 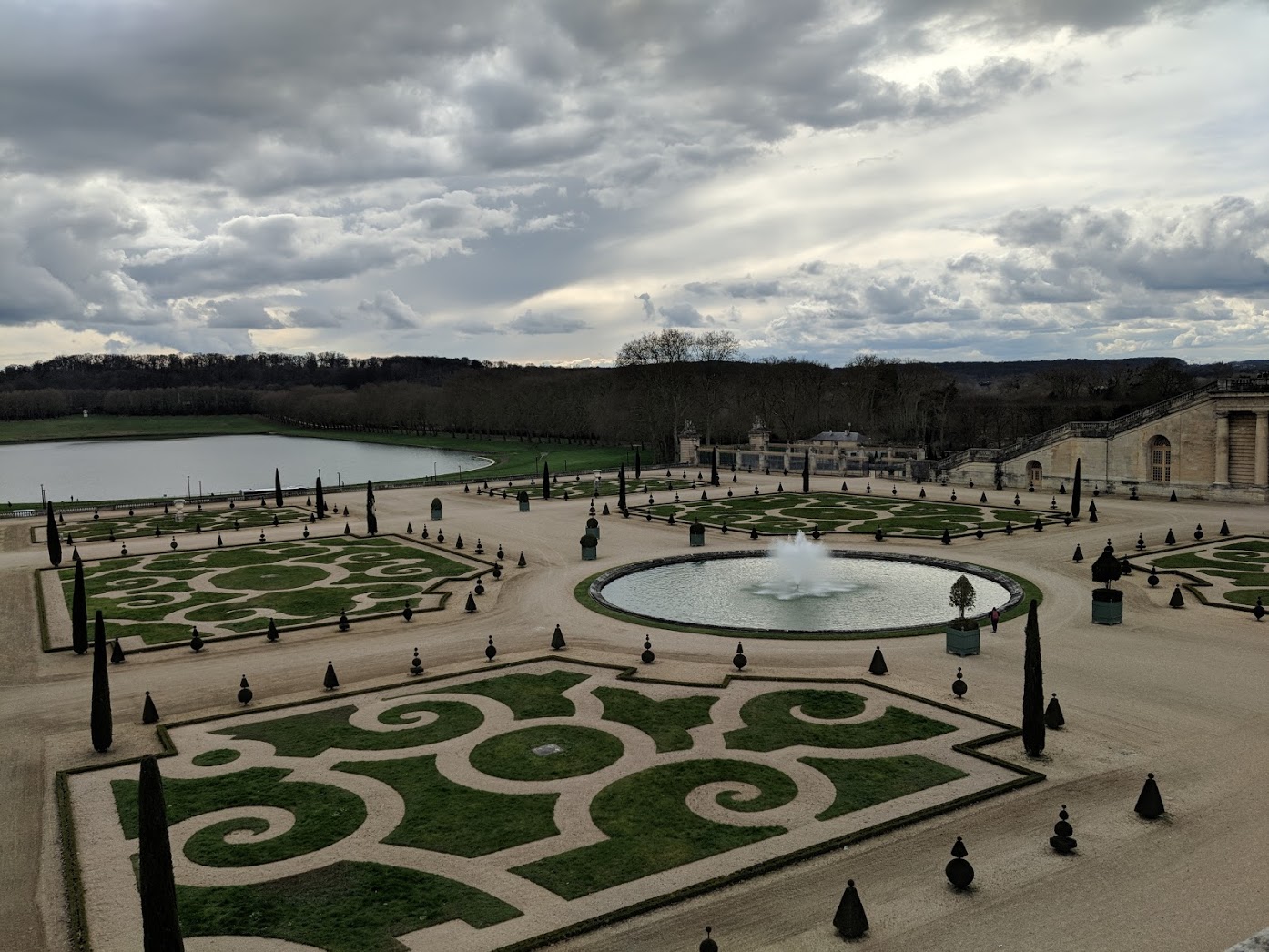 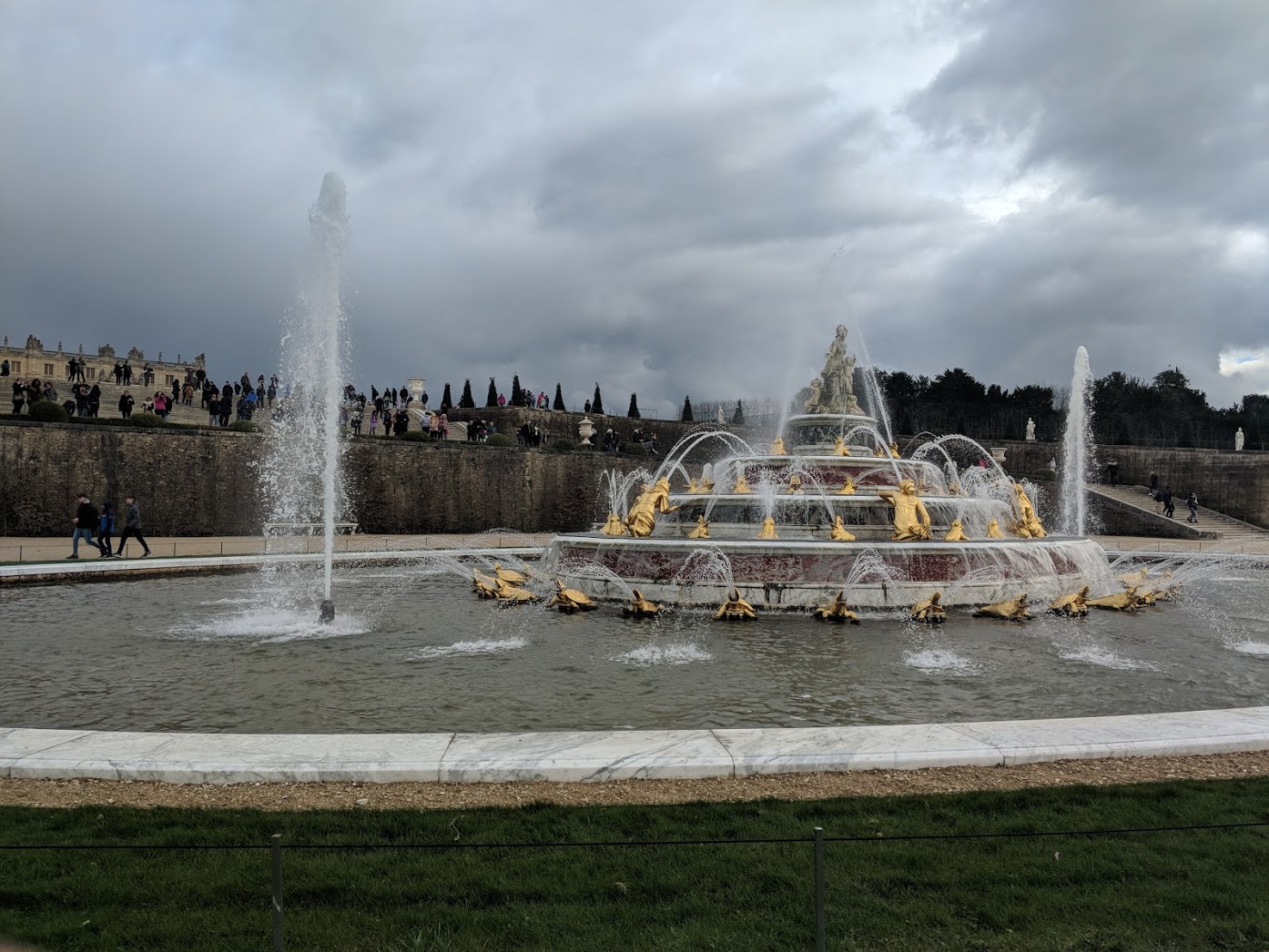 To conclude, if you are in Paris for just a couple of days and are thinking about going suburbs – Versailles could be an option, but don’t expect anything extraordinary. It might make sense to look at other castles nearby – you will get all your impressions but will not have to queue that long.

Here is an example: Domaine Chantilly. This was a real highlight of our little trip: 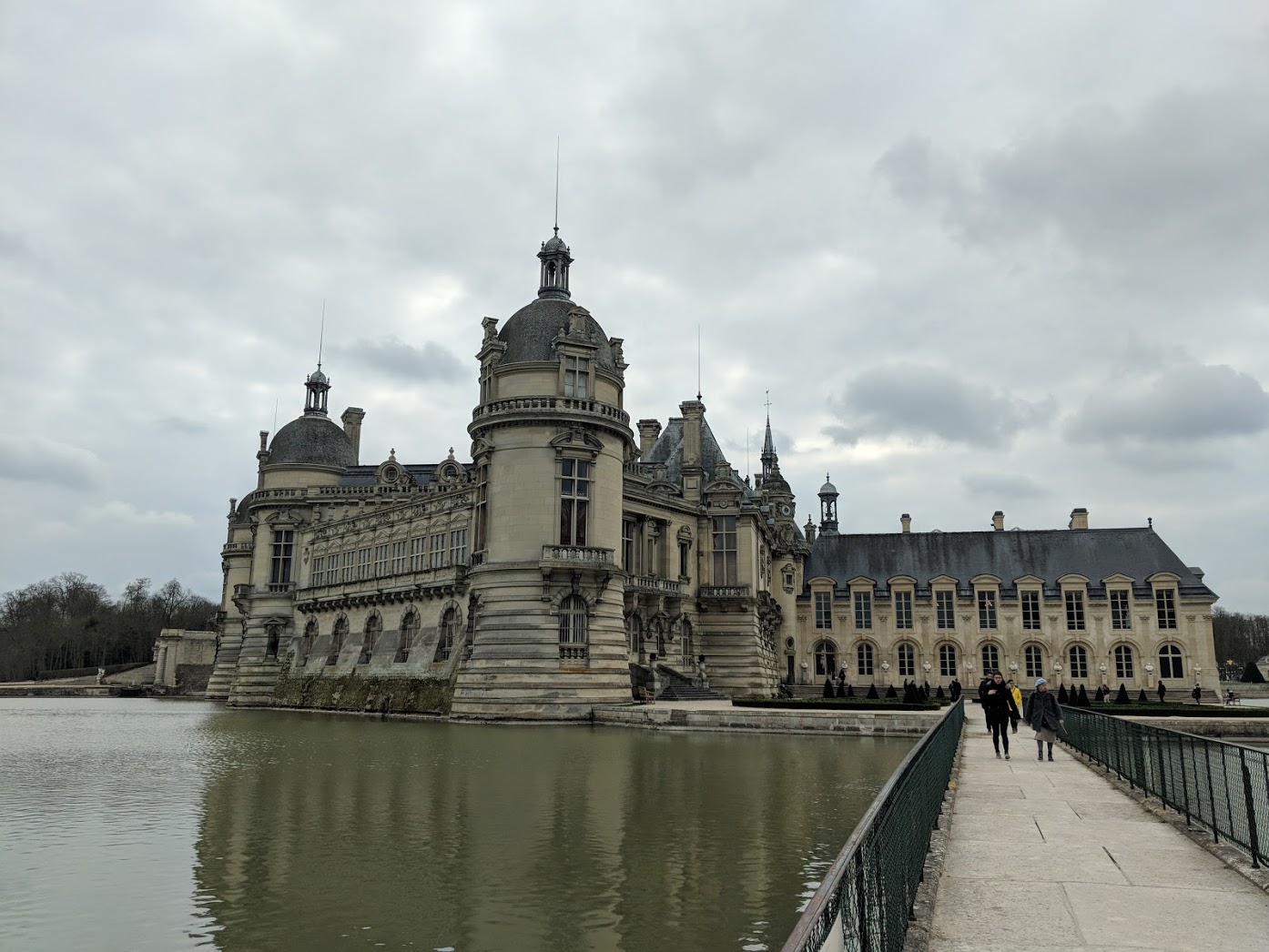 The palace is not as big as Versailles, of course, but is no less charming, and the landscape around it is really cute: 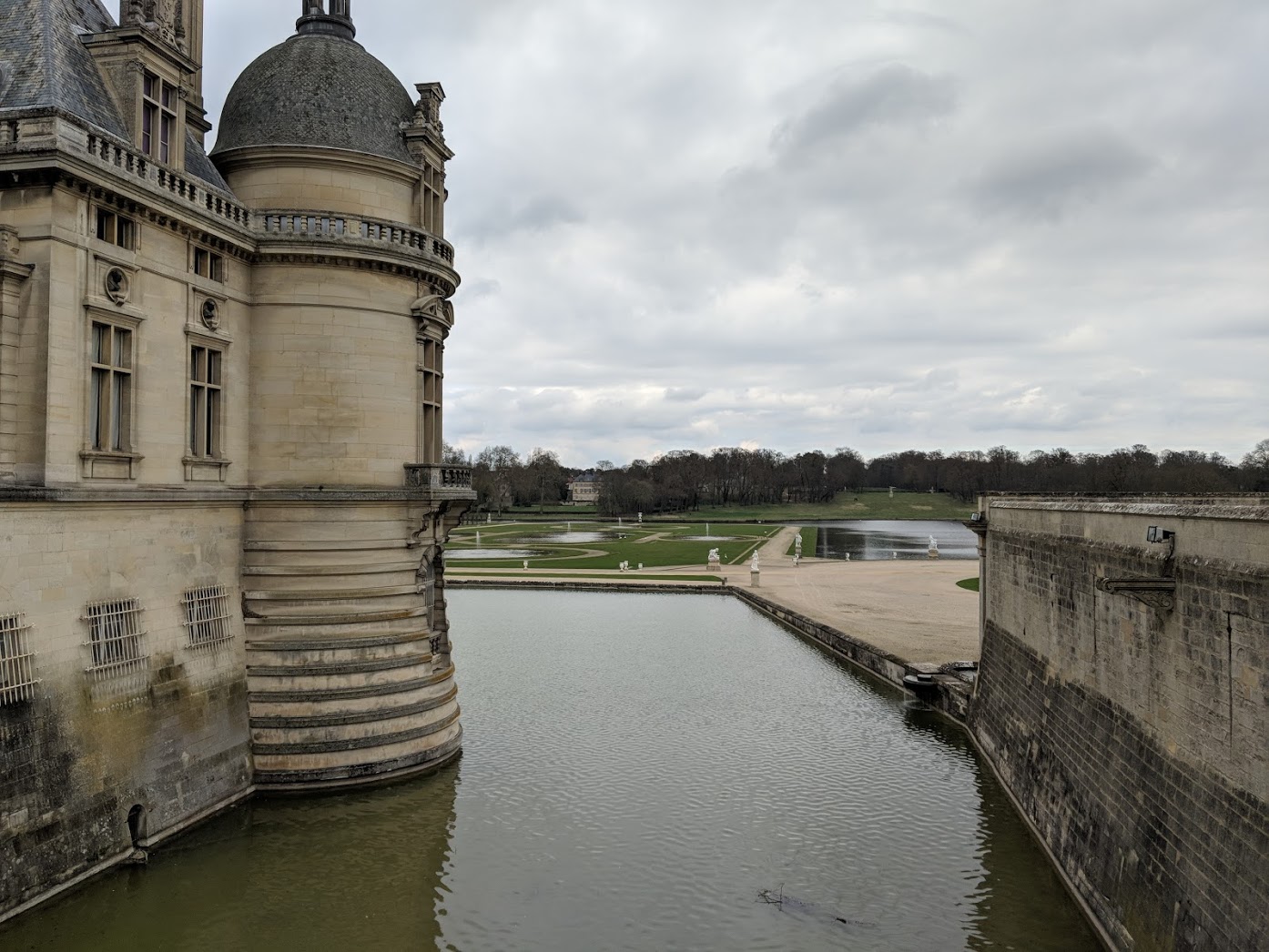 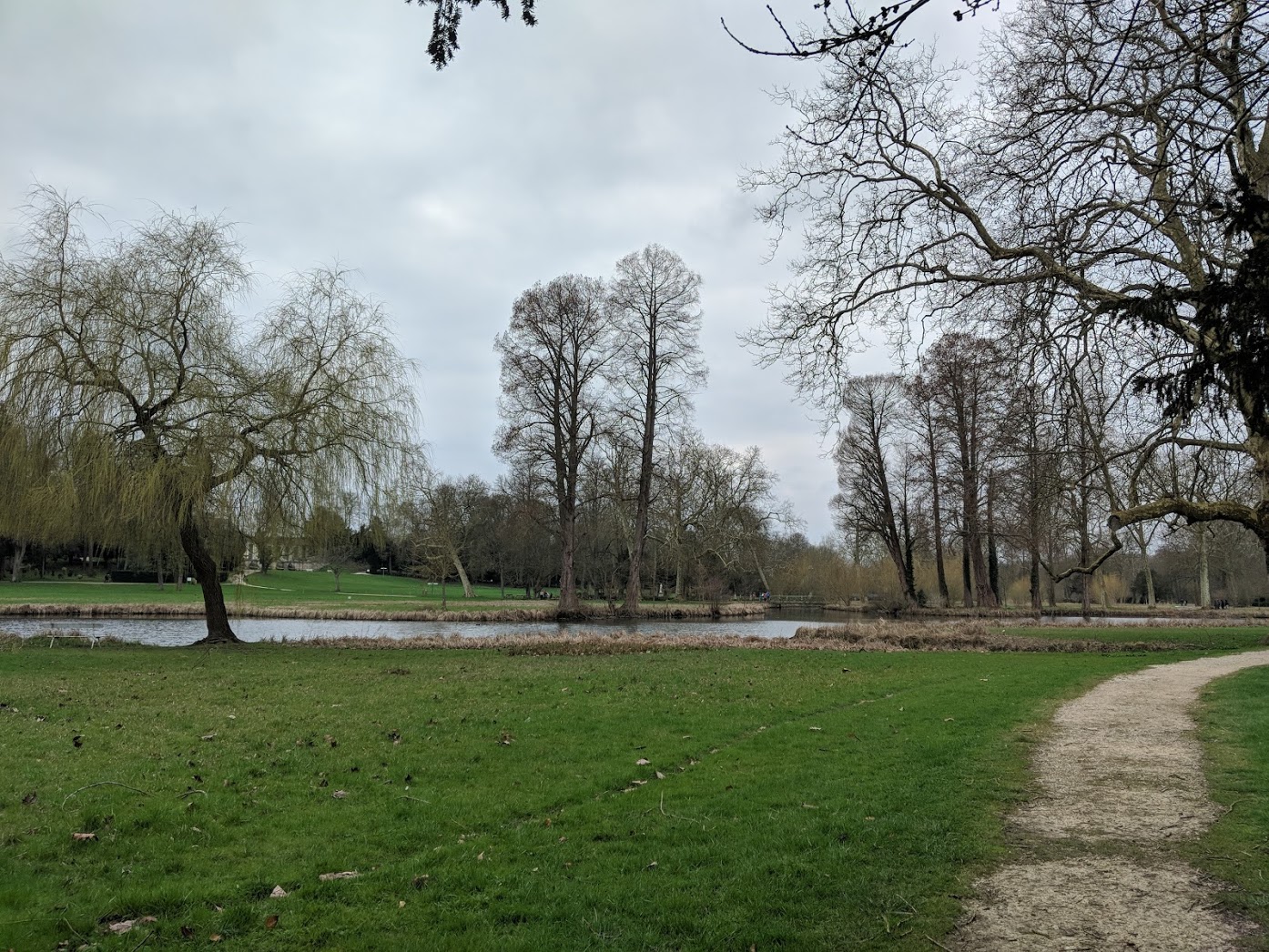 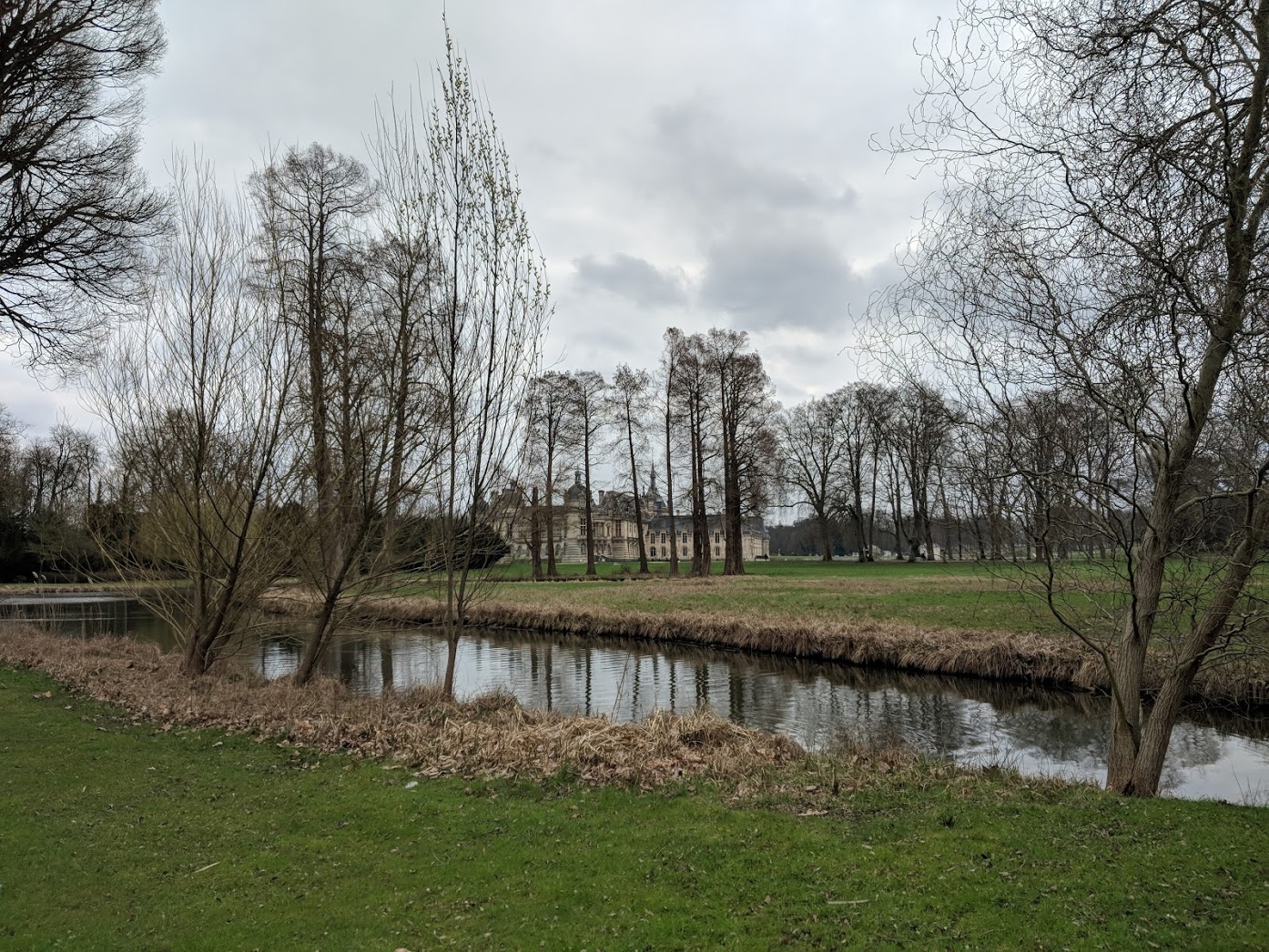 There is also something special about this place: people that run the domain are committed to keep the French tradition of dressage. Next to the palace there are still old stables and a horse race track. The school runs daily master classes and shows which get under your skin comparably to Cirque du Soleil and are accompanied by live music. Here is a trailer for the show currently running at the domain:

Domaine Chantilly is one of the few places which I would visit again if I happen to come to Paris again. In one day here you can cover three activities: walk luxurious halls of the castle, enjoy the park’s landscapes, dive into another world created by the riders of the domain and their horses.

For someone not interested in museums, a couple of days in Paris itself is enough. Watch your wallet – pickpockets are constantly watching groups of tourists to identify the least careful ones! The rest of the vacation one can spend in parks in the city and beyond it, but also in fancy stores: Paris is the world capital of fashion =) Whatever you do, don’t be in a hurry: this city has the spirit of lazy bliss – you will not be able to feel it if you spend all your time running from one sight to another!